Behind the brand: Wall’s ice cream serving happiness for 100 years

When it comes to ice cream sales, Wall’s has got it licked. It has two brands in the global top ten ice cream rankings, sells 40 brands under the Heartbrand logo and delivers happiness in form of ice cream in 52 countries around the world.

In 1913 an entrepreneurial butcher called Thomas Wall decided to counteract the summer dip in sales of sausages by branching out into selling ice cream. World War 1 put his idea on hold. But when Unilever purchased the business in 1922 and large commercial freezers began arriving from the US, the Wall’s ice cream brand was brought to life.

Demand for Wall’s saw vendors travelling the streets of London to sell ice cream via horse and cart. It wasn’t long before bike deliveries were added to the mix. By 1939, Wall’s fleet of tricycle salespeople was 8,500 strong.

The brand has come a long way from selling vanilla ices on the streets of London. Today, Wall’s sells more than 40 brands, many of them local to specific markets. For more information, read the ‘It might surprise you to learn’ section below. What’s more, its ice creams are sold in 52 countries around the world.

There are five Unilever brands in the top ten bestselling ice creams in the world. Two of them – Cornetto and Carte D’Or – are part of Wall’s Heartbrand portfolio.

In 2021, sales from Unilever’s Ice Cream portfolio reached €6.9 billion in turnover, with underlying sales growth of 5.7%. Wall’s was one of three €1 billion ice cream brands.

Getting ice cream to consumers fast and without spoiling has been achieved through partnerships with delivery services such as Grubhub and Uber Eats, alongside tapping into Wall’s existing network of freezer cabinets in local stores and restaurants. This network works to ensure brands such as Carte D’Or go from an online order to delivery to the consumer’s doorstep in less than 30 minutes.

In 2021, this combination of speed and response to consumer demand saw this part of our ice cream business grow by 60%.

The purpose that powers it

There is something for everyone in the Wall’s ice cream portfolio, and that breadth of choice has the ability to drive happiness among all age groups, as well as melt down barriers between different communities.

Wall’s is working hard to leverage that. To build a happier and more inclusive world, one lick at a time.

Alongside partners such as Symrise and Giz and the International Fund for Agricultural Development, Wall’s is working with smallholder farmers to improve yields and livelihoods. Their work has reached 40,000 people in 9,000 households, across 76 villages in the Sava region of Madagascar that help supply its vanilla requirements.

What’s more, every brand it sells in its kids’ range of ice creams adheres to Wall’s Responsibly Made for Kids promise.

The promise is based on three pillars, designed to help parents and care-givers make informed choices for their children. These are Responsible Communication through advertising; Responsible Selling with our Responsibly Made for Kids mark; and Responsible Development, which includes an undertaking that every ice cream in our kids’ range has no more than 110 calories and a maximum of 12 grams of sugar per portion and 3 grams of saturated fat.

In Italy, Wall’s is called Algida. In Germany, Langnese. In the Netherlands, Ola. In the US, Good Humor and in Brazil, Kibon. Wall’s might have different names in different markets but it’s the same delicious ice cream. Local names have been kept because each contains the history and reputation of the former brands. And all of them are united by their shared Heartbrand logo and its phiosophy to ‘Live from the Heart!’ Wherever customers see the Heartbrand logo around the world it means ‘Here there’s joy’.

In the 1970s, the combination fridge freezer became a common appliance in more households across Europe. And with this development came the opportunity not just to enjoy ice cream from a van but also to buy tubs or ice lollies at the supermarket and keep them in the freezer at home. Wall’s was fast to deliver on this trend, with the launch of a variety multipack.

A new theme tune for a new era

In 2020, Good Humor in the US teamed up with American actor, rapper, film-maker and producer RZA to create an all-new ice cream jingle after discovering that the jingle ‘Turkey in the straw’ being used by many ice cream vans had racist roots. In the words of RZA, the new jingle was ‘made with love’ and made free to download in perpetuity. 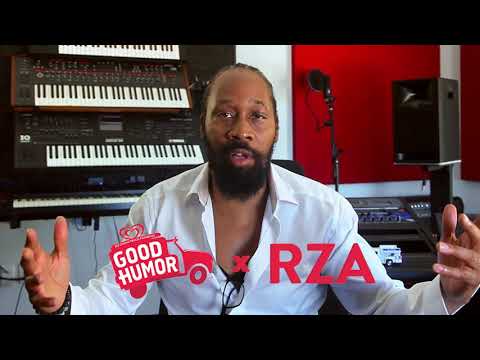 Watch: A new theme tune for a new era

The ice cream with the ‘catchiest jingle ever’

First aired in 1982, this Wall’s Cornetto ad featured a young woman who thinks she is being wooed by an Italian gondolier but finds that he is only after her ice cream. The jingle ‘Just One Cornetto’ was set to the tune of the famous 1898 Italian opera song, ‘O Sole Mio’, a globally recognised Neapolitan song. It was voted the catchiest advertising jingle ever and saw the brand itself doing different advertising variants and one UK beer brand do its own popular spoof.